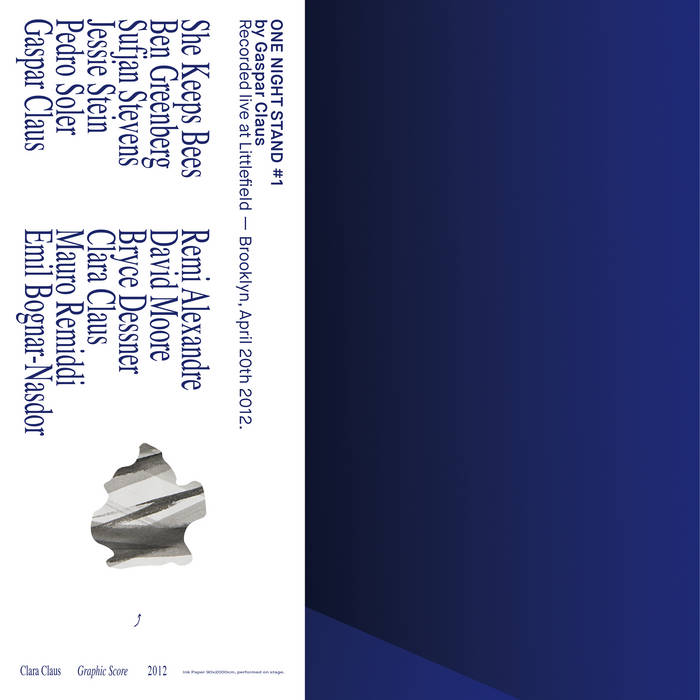 A simple concept: a city, a dozen of musicians performing together songs that each one of them brought in, and a visual artist creating a original piece of work, on site or just for the occasion.
One Night Stand is a series of shows produced by Gaspar Claus for the Festival Permanent*. We hope to be able in the future to organize more One Night Stands in Paris, London, Berlin, Tokyo but also in Johannesburg, Sao Paolo, Reykjavik, New Orleans, Budapest… Concerts allowing to produce further LPs in limited editions.

Today, we want to share with you the recording of the first edition, the one that took place in Brooklyn back in spring 2012.

*The Permanent Festival: this big invisible and fragmented brotherhood proposes, far beyond any notion of tribe, to spread worldwide and as a notion of free and spontaneous action, a certain idea of spontaneous creation, whose movements invent themselves as they uncover. A brotherhood without dogma nor hierarchy, impossible to define, to confine, nor to capture.

A SINGLE SHOW: ONE NIGHT STAND #1 BROOKLYN, NYC, 2012
It was back in 2012, in Brooklyn. This is how the show was announced: www.littlefieldnyc.com/event/101351-permanent-festival-gaspar-brooklyn/

Together with Sufjan Stevens, Pedro Soler, Bryce Dessner (The National) and Clara Claus, Jessie Stein (The Luyas), David Moore (Bing and Ruth), Rémi Alexandre (Syd Matters, Shorebilly), Ben Greenberg (The Zs), Jessica and Andy (She Keeps Bees), Emil Bognar-Nasdor (Dawn of humans), Mauro Remiddi (Porcelain Raft) we had two days to create 11 songs, ranging from flamenco to harsh noise along with some blues, pure improvisation, repetitive music, a visual artwork to be performed as a score, a kind of Fluxus experience, a pop song, a minimalist piece. They all came to this evening and brought a song to perform together with the other musicians.
And we recorded the concert with great care, in the hope of making a record out of it - one day...

DISCOVER THE CONCERT ON A DOUBLE LP!
A one-night stand, 70 intense minutes have passed on a strange territory, the utopia of an instant, an act of love with no other future than the pleasure of your ears.

This campaign will be the only occasion for you to obtain the double-LP One Night Stand #1, as its distribution is absolutely limited to the duration of this campaign. That means that once the campaign closed, it won’t be possible any more to purchase the recording on any physical media.

Besides the double-LP edition that is limited to the orders of this campaign, there will be an ultra-limited edition of max. 65 numbered records: “One Night Stand + Original Score”. This edition will include a piece of the graphic score of 20m long that Clara Claus created specifically for the show in 2012.

Your participation will serve to pay for the mix, the mastering, the design and the manufacturing of the record. And thanks to our cooperation with the wonderful graphic designers from Groupe CCC, I take great care to let it be an outstanding record edition! And if the campaign surpasses our initial objective, the benefits will be reinvested to develop the One Night Stand series and to produce the next show in another city!

Thus, this “One Night Stand #1 in Brooklyn” would be only the first volume of a fantastic collection, a journey around the world, from city to city, meeting musicians who get together for the time of a single concert, for a crazy night when everything becomes possible.

The Permanent Festival invites you to join in to make it happen.

Bandcamp Daily  your guide to the world of Bandcamp